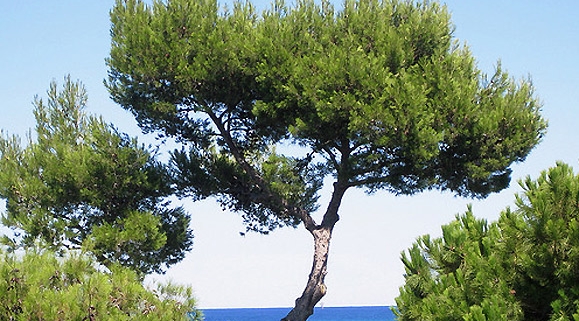 The Maritime pine can grow up to a height of 30-40 meters, often with a graceful, winding trunk. The tree is an extremely resistant plant as it grows in areas which are often dry and is exposed to sun and salt. The Maritime pine is found in the Mediterranean coastal areas of France, Gibraltar, Portugal, Spain, and Italy.  Such conditions may be severe for other plants but the Maritime pine synthesizes a large number of molecules concentrated in its bark which protect it.

The Maritime pine bark extract contains a complex of biologically active substances which belong to the group of the bioflavonoids. More than 4,000 representatives of this group have been identified with well-marked antioxidant properties. It also has a favourable effect on the treatment of more than 50 illnesses resulting from the effect of the free radicals and acts as a prevention against them.

The cosmetic industry uses the extract from the pine bark and tree tops. It is used as an active ingredient with a number of valuable properties:

Natural anti inflammatory agent: Inflammation can make the skin look puffy, red and dry which are all major culprits in making skin look and feel older than it actually is.

Reverses signs of aging: Not only does pine bark extract help delay and slow down the aging process, it also can repair existing skin damage, a claim not many natural or conventional anti-aging skin care products can make.

Increases skin elasticity: Collagen is a major player in making your skin look young and firm. As we age, our collagen production naturally slows down, making our skin look less tight and elastic. Pine bark extract has been shown to increase production of the collagen genes so that skin continues to have that youthful, elastic appearance.

This site uses cookies. By continuing to browse the site, you are agreeing to our use of cookies.